The family physician may have said that your grandmother is showing signs of dementia. Does that mean she has Alzheimer’s? Not necessarily.

Alzheimer’s disease is one of several different cognitive disorders that fall under the umbrella of “dementia.” Dementia itself is not a disease. It is a term that describes a range of cognitive symptoms, including memory loss and other impairments in thinking that severely inhibit a person’s ability to perform core mental functions.

In order to be diagnosed with dementia, a patient must have significant impairment of at least two of the following:

Most people diagnosed with dementia do have Alzheimer’s disease -- between 60 to 80 percent. But there are many other types of dementia that produce similar symptoms. The difference is what is happening within the patient’s physiology to cause those symptoms, said Amy Silbaugh, manager of clinical development at VNA of Ohio.

The Differences Between Alzheimer’s and Dementia

Alzheimer’s disease is caused by a build-up of plaques, or protein fragments, in the brain. These plaques inhibit the ability of neurons to transmit information.

Vascular dementia occurs because the brain is not getting an adequate supply of blood. This type of dementia, the second-most common after Alzheimer’s, is often the result of a series of small strokes.

While some treatments for dementia are similar, treatment options vary depending on the cause. While Alzheimer’s disease has no cure, early detection and treatment can slow down its progression. On the other hand, certain types of dementia are brought on by disorders or deficiencies that can be halted. In some cases, the symptoms may even be reversed.

Silbaugh said the most important thing to remember about dementia, no matter what the type, is the value of early detection.

For Caregivers: Preventing Wandering Among Patients with Alzheimer's and Dementia

Most caregivers of patients with Alzheimer’s and dementia share this near-constant fear: In a... 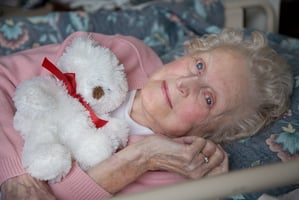 Facts about the Cost of Alzheimer’s

Did you know that 62% of family caregivers pay for a loved one’s Alzheimer’s care out of their own...

Alzheimer’s Disease: What are the Symptoms?

When a senior friend or family member stumbles over a word or loses their keys, it is easy to...